The long arm of the Conspiracy had something to do with the failed attempt of Adam Ondra to climb the Nose onsight.

The Nose, in the day of Adam’s try

Speaking of his climb, Adam said that, since the first light of dawn, he had seen the Californian sky strewn with strange white trails. «I thought it was the condensation of magnesium coming out of the chalk bag when you shake your hands while  resting» he said. Fearless, Ondra thus started the onsight climb with his dad, but the first difficulties he encountered were that  the holds and the feet placing were very slippery. However, he continued his climb without interruptions. Once he arrived at the Great Roof crux, he felt his hands literally slip out of the micro-crack of this hard pitch and he fell. «I’ve never climbed a route with such slippery holds» he said incredulously to reporters at a press conference. «Impossible — says Lynn Hill, the protagonist of the historic first free ascent in 1993 — the grip on that route is just perfect». 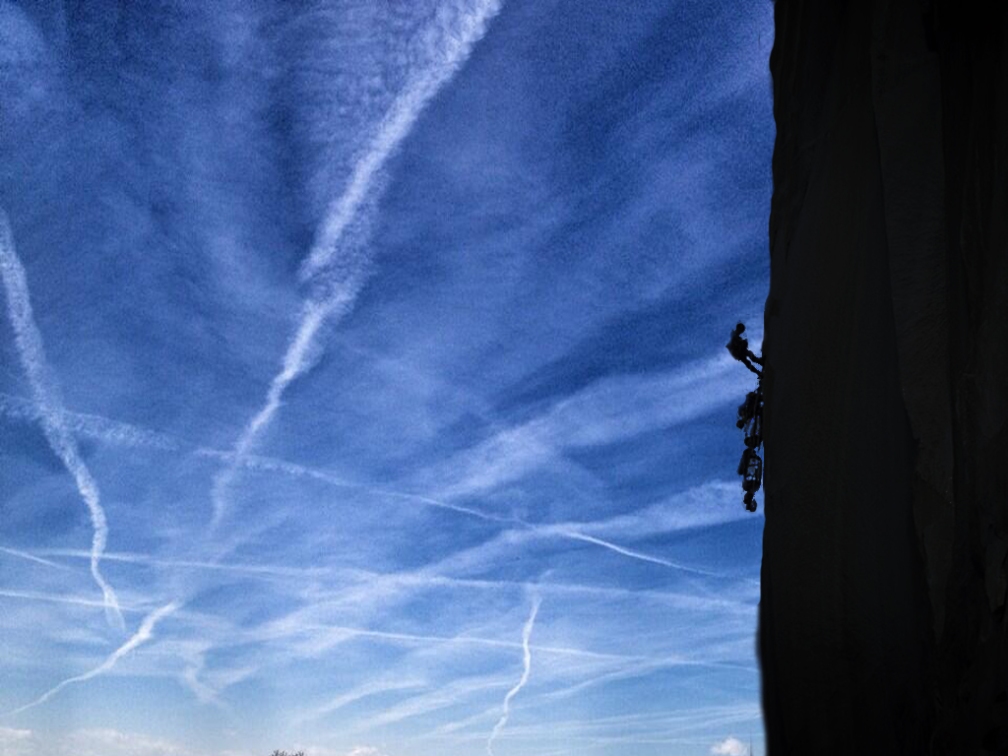 Ondra at the belay, before reaching the Great Roof

But the story does not end there. The photos taken during the day of the try and published on the Internet, caught the attention of some supporters of the Chemtrails conspiracy theory, which decided to go to California and perform some analysis the following days. The results are surprising: it was in fact recorded on the grass at the base of the wall an abnormal amount of different fats, including chickenic  acid extracted from pieces of Kentucky Fried Chicken, the hamburgolic acid extracted from residues of McDonald’s, and the lactic acid, easy to find because it is contained in the climbers’ forearms all around the world, regardless of the grade climbed or the number of rest days.  According to conspiracy theorists, these materials would have been sprayed on the area  the night before the try.

«Absurd allegations — respond to official sources of the US government after the publication of these results —, the Yosemite park is a favorite destination for Sunday outings with grilled burgers, sausages and chicken. And as for the lactic acid, it is usually dripping down to the ground at the end of the day from the cracks in the routes, which absorb it by osmosis from the arms of the climbers. So, it’s nothing strange that grease was found on the lawn or on the wall. You have to learn to accept – added the spokesman with a touch of nationalism – when it comes to that, Caldwell is stronger than Ondra».

Also according to the conspiracy theorists, it seems that the KGB, still present in the Czech Republic after more than 25 years after the fall of the Berlin Wall, pushed Adam to organize a trip to Yosemite to assert the hegemony of the former Warsaw Pact countries in the field of climbing, now more and more strategic on the international stage. «The KGB thinks that an onsight climb of the historical route would surpass the achievements of Lynn Hill, who made its free ascent in 1993, and the latest one of Tommy Caldwell on Dawn Wall, which led to too much publicity and glory to American imperialist alpinism» said their representative. How could you blame him?

And while international diplomacies take a side on this delicate subject, Ondra says naively: «I do not believe in the conspiracy. If I fall, I just have to train more. From now on I’ll put some of my dad’s chainsaw grease on my campus».